Who Has the Cheapest Car Insurance Rates in Fort Smith?

Have you recently or are you planning to move to Fort Smith, AR? Or maybe you are a current resident who is receiving a state driver’s license for the first time? Regardless of your specific circumstances, if you plan to own and operate a motor vehicle in Arkansas, you will need to become familiar with the state’s auto insurance laws and regulations.

All licensed drivers with registered vehicles, are required to have auto insurance in Arkansas. And, because insurance is a competitive market, companies often charge different amounts for virtually the same amount of coverage. This this reason that the Arkansas Insurance Department recommends shopping around for potential savings.

As you look for coverage that suits your needs and budget, it’s important to have a general understanding of how plans are priced. While every company is different, many determine their rates by assessing a number of different factors, including but not necessarily limited to:

Your city’s population can make a big impact on the amount you will pay for auto insurance. Drivers in locations with less people tend to have better luck finding lower rates. Fewer motorists on the road often means fewer accidents over time. Conversely, customers residing in highly populated areas are likely to pay more, especially if collisions in the city occur frequently. While guidelines vary, rates are often higher when there are than 5,000 people per square mile. With 87,891 people living in Fort Smith, AR in 2019, the city had an approximate population of 1,391 per square mile. Because this is well below the average, it is likely that the cost of insurance coverage will be lower here than it is in other, more densely populated, cities.

An area’s average commute time can also impact the cost of auto insurance. Driving for longer periods of time each day, especially during high-traffic periods, increases the chance of an accident occurring. For this reason, insurance companies tend to offer lower rates in locations with shorter transportation times. It can vary, but residents who live in cities with commutes exceeding the national average of 26.6 minutes often have higher insurance premiums. From 2014 to 2018, the mean travel time for workers 16 years and older in Fort Smith, AR was only 15.9 minutes. This is well below the national average, so it is likely residents will see a reduction in insurance premiums compared to other cities.

Another important factor that often impacts the cost of auto insurance is the frequency of auto theft in the area. Again, this will likely make a positive difference for drivers Fort Smith, AR, as the risk of theft seems quite low. With only 576 thefts reported in 2018, the city is ranked #172 in the National Insurance Crime Bureau’s (NICBs) 2018 Hot Spots Report Map. 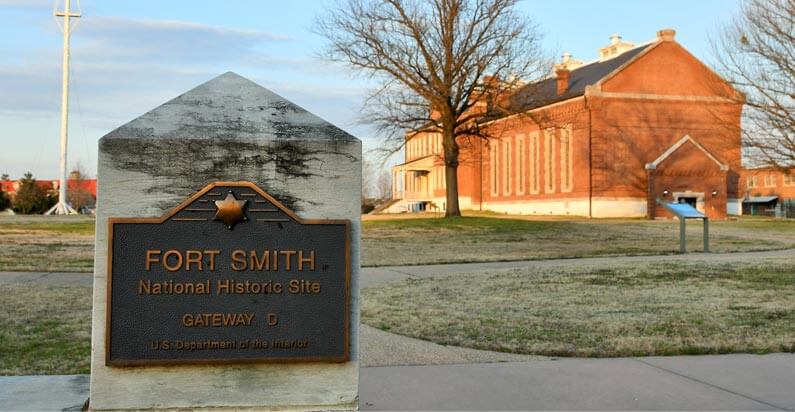 What Insurance Coverage is Needed for Drivers in Fort Smith

Every Arkansas driver must have auto insurance. Failing to maintain the necessary minimum amount of coverage can lead to penalties and/or fees. While you should always opt for a plan that fits your driving habits best, you are required by law to purchase liability protection:

Drivers must have a minimum of $25,000 of coverage for property damage per accident.

All other types of auto insurance coverage are voluntary unless required by a lienholder or if your vehicle is financed and the bank requires more coverage. The Arkansas Insurance Department does, however, encourage drivers to consider all coverage options including collision, comprehensive, personal injury protection, uninsured motorist, and underinsured motorist. This is because the minimum coverage required may not be enough to fully protect you, your passengers, and your property in the case of a catastrophic accident.

As previously mentioned, insurance is a competitive market. Companies will charge varying prices, with some offering significantly lower rates than others. Remembering this can save you money as you look for a plan in Fort Smith. While local rates vary, Geico and State Farm Mutual tend to be some of the cheapest solutions throughout the state. Keep in mind, however, that the best price does not always equate to the best coverage. Make sure the provider you choose also has good service ratings, positive customer reviews, and the coverage you need.

Use our guide to get a cheap car insurance quote today.

When it comes to purchasing auto insurance, bad credit can impact coverage rates. Despite this, it’s still possible to find coverage at a reasonable price. Because companies weight the importance of specific factors differently, the best way to find a lower premium offer is to research your options thoroughly. Request quotes from multiple insurers and compare the coverage they offer. Geico may be a good place to start, as this company does tend to offer some of the best rates for those with poor credit.

Find out how your car insurance rates are impacted with bad credit.

Liability insurance covers the possible cost of damage you cause to others while driving. This could mean the cost of medical care for those injured in an accident or repair costs of the damage you have caused to other vehicles.

What is Full Coverage Car Insurance?

While liability insurance covers other people and vehicles in an accident where you were the one considered at fault, full coverage insurance can also cover you and your vehicle as well. Full coverage includes two different types of coverage combined into one insurance plan; comprehensive insurance and collision.

Comprehensive coverage is for the damage of other vehicles that are outside of driving situations such as weather damage, fire, or theft.

Collision coverage is basically to pay for damage that you caused while driving such as an accident with another vehicle, hitting an object, or driving off the road.

The difference between collision and comprehensive is, if a tree were to fall on your car and damage it, comprehensive insurance would cover it, however, if you were driving and hit a tree causing damage to your car, then it would be covered by collision.

The chief distinction between full and liability coverage is that full coverage ensures that any damage done to your car can be covered by insurance. Liability insurance only protects you from claims when you are at-fault in an accident. You will still need to pay for any damage to your own car, you just won’t have to pay for damage you caused to another person’s car. Full coverage can cover damage to your car even if the other driver is not insured and cannot compensate you for damages.

Finally, all states require that you carry at least a liability insurance policy so that collision victims receive compensation in the event of an accident. At-fault drivers are likewise protected from claims resulting from an automobile accident.

Additional cities in Arkansas you can check out.

Find additional ways to save on your Fort Smith car insurance premiums with these insurance discounts:

Here are Some of the Typical Factors that Affect Your Fort Smith, AR Car Insurance Premiums

Check Out Car Insurance Companies in Fort Smith and Reviews