Underinsured and Uninsured Motorist Coverage, Find Out if You Need It

What is Uninsured Motorist Coverage?

Although every state except New Hampshire requires drivers to carry insurance, according to the Insurance Information Institute (III) an average of one out of every eight cars on the road are uninsured. In some states it’s as high as one in every five drivers, so an uninsured motorist policy is designed to help you if you’re involved in an accident with one of those drivers.

Uninsured motorist coverage will pay for the financial costs of an accident such as medical bills. Because ach state sets their own insurance laws there are three basic types of uninsured motorist policies available; the best choice for your own coverage will depend on where you live. Here’s a look at the three policies:

Keep in mind that the laws vary from state to state; for example California does not allow a hit-and-run accident to be claimed on you UM policy. In addition, because a stolen car is considered uninsured from the moment of theft if you’re in an accident caused by the driver of a stolen car it will probably be covered under your UM policy.

Uninsured motorist coverage is required by law in 20 states as well as the District of Columbia, so if you live in one of the following states it’s a mandatory requirement when you purchase your vehicle insurance policy. If you don’t live in a state that requires UM or UIM here are some facts that may sway your decision to purchase the coverage as an add-on policy:

The Insurance Research Council (IRC) reports that in 2015 a full 13 percent of drivers nationwide were uninsured. This varies widely from state to state; for example in Maine the percentage is only 4.5 but in Florida it’s a whopping 26.7 percent. The following chart shows the top ten highest and lowest uninsured motorist claims by state:

According to the Insurance Information Institute there are 22 states that require uninsured motorist coverage: 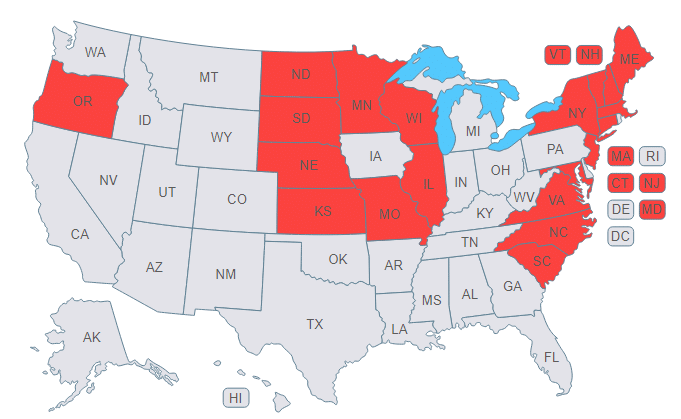 In addition, there are 14 states that require underinsured motorist coverage: 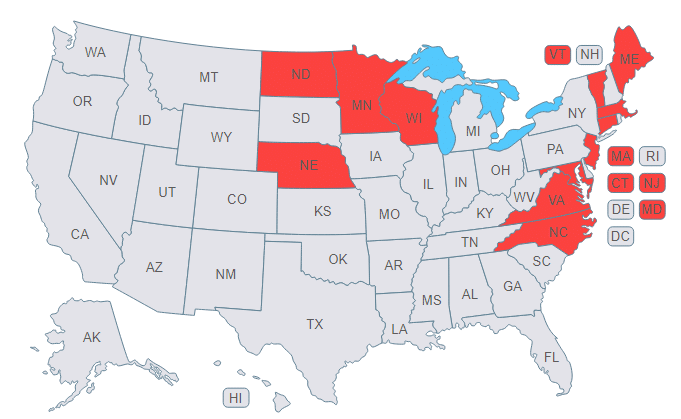 Are There any Limits on Uninsured Motorist coverage?

Uninsured motorist coverage only covers the cost of medical bills and lost wages, not pain and suffering or punitive damages. UM will not cover the expenses if you’re using your vehicle as a taxi or paid delivery vehicle, which means you’re being paid to drive someone or something to their destination. Note this doesn’t include carpools, so you’ll be covered on the way to that soccer game!

In addition, there’s usually a cap on the amount of coverage your UM or UIM policy will pay. This amount is decided at the time your policy is written, so you should clearly understand the amounts and whether they are per person or per incident.

There are usually restrictions on when the policy will be liable, for example if the injuries incurred are covered by a worker compensation policy or disability policy your UM probably won’t be liable because you’d be duplication a claim.

Underinsured Motorist policy limits depend on which state you live in and are usually determined by one of two things:

The underinsured vehicle bodily injury liability is equal to or higher than the limits set by the state.

Is under the limit of the other person’s UIM policy coverage.

State law will determine how this coverage works. For example, if you’re in an accident caused by an underinsured person who only has $50,000 injury coverage and your UIM policy covers up to $100,000 the person at fault’s policy would cover the first $50,000 and then your own policy would pay for the medical fees from $50,001 to $100,000. If you only carry a UIM policy of $50,000 yourself it would pay zero because it is equal to the insurance of the person at fault. In other states the amount of coverage the other person has does not matter.

Check whether the policy offers wage compensation, and whether there’s a separate policy for compensation for pain and suffering and for damages to your vehicle.

How do they Structure the Policies?

Your policy will depend on your personal information, and for UM there may be state minimum requirements. The following chart shows a typical list of the Massachusetts minimum coverage for each type of insurance:

So by the Massachusetts example above, if you’re in an accident caused by an uninsured driver your policy would cover $20,000 in medical expenses for you and each passenger in your vehicle, up to $40,000 per accident. Note that this is the minimum coverage; if you’ve ever seen a bill for an emergency room visit or operation then you know it might be a wise choice to purchase a higher amount of coverage!

As another example, South Carolina law requires you to have UM coverage that is equal to the minimum liability requirements, which are 25/50/25. (UIM is optional in South Carolina).

Generally you will have choices as to how much coverage you’d like to purchase if you wish to have more than the required minimum (if any) in your state. Although choosing a higher amount of UM coverage will raise your premium it may be a wise choice if you live in one of the states that are on the above chart of highest uninsured drivers!

In some states it’s required that you are offered the purchase of uninsured or underinsured motorist coverage, and if you decide not to buy the policy you’ll be asked to sign a waiver to prove the insurer offered you the choice.
As a rule of thumb your choices of UM or IUM coverage will basically match your liability coverage choices. If you don’t understand the way the policy is structured in your state don’t be afraid to ask!

What do you decide before you Buy?

Before you purchase your insurance you should determine whether uninsured motorist or underinsured motorist coverage is required in your state, and if so the minimum amount you’ll be required to buy. If it’s not required you should decide whether you want it as an optional policy and if so how much coverage you’ll need. As a rule of thumb, UM and IUM is offered at the same amounts as your liability coverage.

Here’s an example from the California Department of Insurance:

The following example is from the Texas Department of Insurance, so you can see the difference in requirements:

Your expenses from an accident caused by an uninsured motorist, a motorist who did not have enough insurance, or a hit-and-run driver. Also pays for personal property that was damaged in your car.

There is a mandatory $250 deductible for property damage. This means you must pay the first $250 of the expenses yourself before the insurance company will pay.

There are two types of UM/UIM coverage:

What it pays: Your expenses from an accident caused by an uninsured motorist, a motorist who did not have enough insurance, or a hit-and-run driver. Also pays for personal property that was damaged in your car.

There is a mandatory $250 deductible for property damage. This means you must pay the first $250 of the expenses yourself before the insurance company will pay.

There are two types of UM/UIM coverage:

Who it covers: You, your family members, passengers in your car, and others driving your car with your permission.

Insurance companies must offer UM/UIM coverage. If you don’t want it, you must reject it in writing.

Here are some other factors you should decide on when you make the choice to purchase uninsured motorist insurance:

Before you choose or refuse UM or UIM insurance you should check with your health insurer and determine exactly what would be covered and what would not. If you’re still not clear then make a list of questions before you get your insurance quote from us!