Blood alcohol content, or BAC, is a term that refers to the percentage of alcohol found in a person’s blood stream, and it can be measured within 30 minutes to an hour after that individual starts drinking. Contrary to popular belief, there’s no shortcut to sobering up—time is the only reliable option. As such, water, coffee, and cold showers won’t reverse the effects of alcohol in your system.

DUI laws make it vital for anyone drinking outside of their home to be aware of their blood alcohol content before hopping in the car.

While everyone metabolizes alcohol differently, blood alcohol content calculators serve as a way to estimate how much you’ve had to drink. But, it’s important to note that while calculators can help you check in with yourself, they are not a completely reliable tool for determining whether it’s safe to drive or appropriate to work after drinking.

In this article, we’ll discuss what a BAC calculator is for, factors that influence BAC, and how BAC calculators may help you avoid DUIs—and the consequences that come with that offense.

A blood alcohol content calculator, or BAC calculator, offers a rough estimate of how much alcohol you have in your body based on how many drinks you’ve consumed, as well as your size, sex, and how long you’ve been drinking.

It’s important to note that BAC calculators do not prove that you are legally safe to drive, nor is there any guarantee that the results are fully accurate. Several factors including age, sex, body type, how much food you’ve eaten, and whether you’ve taken any medication before consuming alcohol all come into play, here (more on that in a moment). BAC calculators are primarily used to help people keep track of how much alcohol they’ve consumed. Individuals are responsible for monitoring themselves for symptoms of intoxication and should not get behind the wheel if they are experiencing any impairment at all.

It’s also worth noting that a BAC calculator isn’t designed to replace the guidance offered by your medical care provider and, if you have a health condition, you should consult with a doctor to learn more about whether its safe to consume alcohol.

How Much Alcohol is in Your Blood?The Rates for Insurance Calculator Can Help

Your BAC is approximately:

Depending on your blood alcohol content, you can experience different side effects. Some of those side effects can include (but not limited to):

In most states, anything over .08% BAC is against the law and is also dangerous for you and other drivers on the road. You can use our calculator to also increase the time in hours and see how long the estimate will take for you to get to a 0% BAC level.

Factors that Affect Your BAC

There are many factors that can influence your blood alcohol content

Here’s a quick look at how the effects of alcohol change as your BAC level increases.

When calculating your BAC, it’s important to consider that the definition of “one drink” varies by the type of alcohol you’re drinking and its alcohol content. Standard drink size—which for many, may be a call back to middle school health class—is typically broken down as follows: 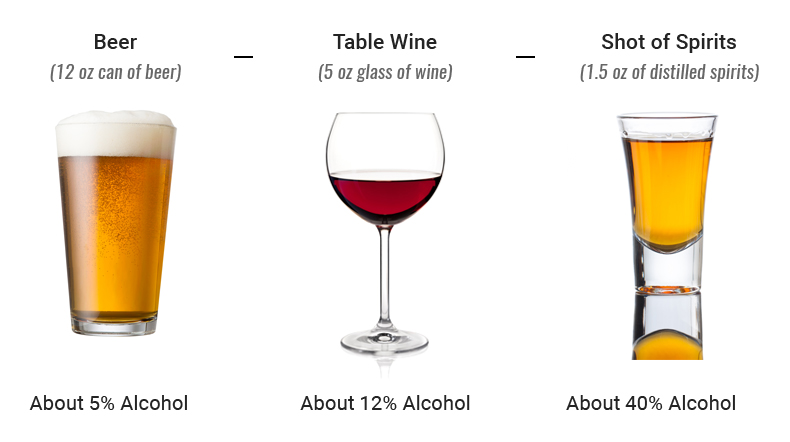 While most standard red and white wines tend to hit the 12% mark, the alcohol content of one beer can vary considerably—with light beers clocking in at as low as 3% or 4%, while stronger craft beers can sometimes contain more alcohol than your typical wine.

Prior to 1998, the legal limit varied from state-to-state. That year, President Clinton called for a national standard for defining legal intoxication. Soon after, several bills were passed to reinforce the legal limit, including a Department of Transportation bills that would cut federal funding for states that failed to adopt the .08% standard.

Additionally, most states have stricter laws in place for individuals driving with exceptionally high BAC levels. Most often, that higher limit is .15%, though some states go as high as .2% or .25% or have multi-tier BAC limits—i.e. .08%, .15%, and .2%. These higher limits are linked to stricter penalties than the .08% threshold, due to the increased threat to the public.

All US states have what’s known as "implied consent" laws, which require any driver arrested for driving under the influence to agree to chemical testing. Typically, law enforcement tests BAC levels using a breathalyzer or blood test but occasionally uses urine testing.

Here’s a quick rundown of the methods that law enforcement typically uses to determine whether someone is driving under the influence.

During DUI stops, law enforcement might ask a driver to perform a field sobriety test, or FST, before administering a chemical BAC test. There are several different methods an officer might use such as a one-leg stand, the walk-and-turn, the horizontal gaze nystagmus, among others.


Poor FST performance may prompt an officer to request breathalyzer or blood test for further investigation. That said, drivers aren’t legally obligated to participate in FST’s and can’t be formally charged for refusing to take the test—though they may be subject to another form of testing due to the implied consent law.

Breathalyzers are the standard testing method used by law enforcement to determine an individual’s BAC level. Today’s devices are lightweight and accurate, making this the most convenient testing method for officers out in the field. The idea is that there is a direct relationship between BAC and the concentration of alcohol on the breath. When a person breathes, gas is exchanged from the lungs to the blood—oxygen on the inhale, and CO2 on the exhale. During that exchange, the alcohol in the bloodstream vaporizes and is carried out of the lungs when a person exhales.

Blood tests are the most accurate BAC testing method, though they are subject to lab testing errors. For law enforcement officers, blood tests lack the convenience of the breathalyzer, as they’ll need to obtain consent from the driver to draw blood and transport that individual to a medical facility to perform the test. In some states, drivers have the choice to between breath and blood testing—though most opt for the former. Blood tests are typically used when the driver is deceased or unconscious or has a medical condition like asthma or emphysema that prevents them from blowing hard enough to get an accurate read.

Urine testing isn’t the most accurate way to assess an individual’s current intoxication level, but it does indicate a presence of alcohol in a person’s system. Typically, alcohol enters the blood within about 15 minutes after it was consumed and, at that point, an individual may start experiencing the initial signs of intoxication. Again, it takes about an hour for the liver to metabolize alcohol, and within 1.5 to 2 hours, it will begin to show up in the urine. This test is used primarily to determine whether a person had been drinking hours before.


This method does come with some problems. For one, urine alcohol concentration doesn’t directly correspond to BAC numbers and varies based on several factors like whether or not a person was dehydrated or their metabolism. The presence of sugar and acetone in the body can cause false positives, as they may cause fermentation in the urine.


Refusing chemical testing upon a lawful request from a police officer generally leads to a license suspension. And, should the case go to trial, the prosecution is typically allowed to tell the jury you refused to take the test.

What Does a DUI Mean for Your Insurance Rates?

While some insurance companies do provide service to drivers with a DUI on their record, they will charge more than they would someone without a history of risky driving behavior.

Because your driving record plays a major role in determining how much you’ll pay for auto insurance, DUI convictions can cause insurance rates to surge. Factors like age, driving history, and the amount of time that has passed since the DUI all come into play here—and once a DUI is removed from your driving record, you’ll likely see a reduction in insurance premiums.