Who Has the Cheapest Car Insurance Rates in Garden Grove?

Are you a new driver in Garden Grove, CA? Whether you just moved to the area, are planning to move soon, or are preparing to receive a driver’s license for the first time, it’s important to become familiar with the state’s auto insurance laws.

In order to own and drive a motor vehicle in California, you’re required to purchase auto insurance coverage. While the state is known to have some of the highest rates in the country, there are still ways to find coverage that fits your needs and your budget. This process starts by gaining a better understanding of how insurance companies decide to price their coverage and then researching potential options thoroughly.

When determining what to charge for insurance coverage, companies regularly take into consideration a number of different elements. Some pertain to you history, while others are locational. Every insurer is different, but most incorporate the following factors when establishing rates:

Population density is often important because larger cities tend to see more accidents. As a result, many companies offer drivers residing in rural areas lower premiums and charge those in highly populated areas more. If this is a consideration, you can generally expect to see an increase in rates when there are over 5,000 people per square mile in a particular area. As a geographically small city with approximately 171,644 living there in 2019, Garden Grove, CA, had a population of 9,524 per square mile. Based on this information, drivers in this city will likely pay more for auto insurance coverage than they would in other less populated areas.

Another important factor often considered is the average commute time for drivers to and from work. It’s not uncommon for companies to offer lower rates when travel times are shorter, likely because less time on the road tends to result in fewer accidents. The national average commute time is 26.6 minutes. Drivers residing in cities with transportation times exceeding this time frame are more likely to have higher insurance premiums. The average travel time to work for individuals 16 years and older in Garden Grove, CA is 28.4 minutes. While not significantly above the average, it’s still possible that this number will cause auto insurance rates to be higher.

Risk of auto theft also often plays a role in establishing the cost of auto insurance. Fortunately, there seems to be relatively little risk of auto theft in Garden Grove, CA. In fact, the city is not even included in the National Insurance Crime Bureau’s (NICBs) 2018 Hot Spots Report Map. This could help to bring the cost of insurance down some in the area. 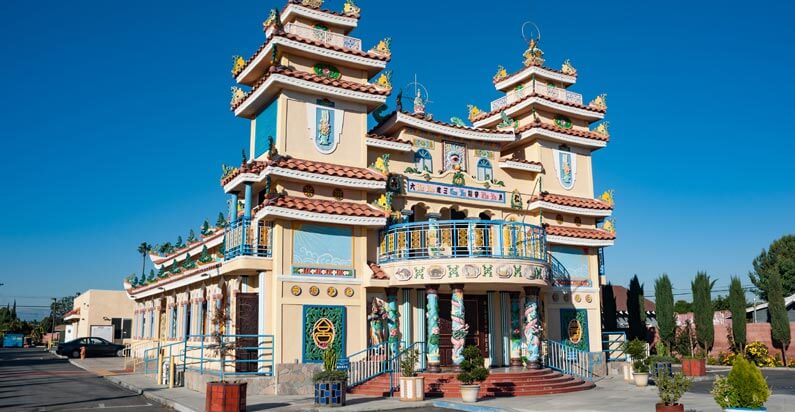 What are the Insurance Requirements in Garden Grove?

If you plan on owning and driving a vehicle in California, you will need to purchase auto insurance. Unlike some other states, California requires all drivers involved in an accident to file claims through their insurance companies, even if they are not found to be responsible for the collision. For the protection of others, all drivers must have coverage that includes at least the following:

Drivers must also have a minimum of $5,000 of coverage for property damage per accident.

Drivers must carry coverage for uninsured motorists in the amounts of $15,000 for a single injury and $30,000 to cover multiple injuries in a single accident.

Liability insurance does not, however, cover bodily injuries or property damages sustained by you, your passengers, or your vehicle if you are found responsible for the accident. For this reason, it’s recommended that you consider purchasing additional options, such as comprehensive insurance, which can cover your injuries and damage to your vehicle from weather and ‘Acts of God’. Without it, you could be financially responsible for any resulting medical bills and/or auto repairs.

Because insurance is a competitive market, some companies offer lower rates than others. While cost should never be the only determining factor when selecting coverage, it’s worth researching the cheaper options first. Local rates may vary, but Geico does tend to be one of the least expensive solutions in the California. Ideally, you should request quotes from multiple insurers and pick the one that has the best service ratings, customer reviews, and rates. Always choose coverage that is specifically tailored to your needs, even if it costs a little more.

Learn how to find cheap car insurance near you.

Fortunately, California does not permit insurance companies to use credit scores to determine individual premiums. This means that drivers in Garden Grove, CA will be able to find coverage at a reasonable price regardless of their history. Keep in mind, however, that providers are likely to set prices based on other factors as well, such as customer driving records and the number of miles driven per year.

Learn about how your credit score can negatively impact your insurance rates.

Collision will pay for any damage you did to your own vehicle when you backed into that utility panel at the RV resort. Comprehensive will pay for the damage your vehicle suffered when a tree fell on it in intense rains that weakened the soil.

Another difference between the two is that a deductible is associated with full-coverage insurance, but not with liability. There is also a difference in price, where full coverage will cost more than liability insurance.

Additional cities in California you can check out.

Ways to Lower Your Insurance Premiums

Save on Your Insurance Policy Rates With These Discounts in Garden Grove:

There are many factors that affect your insurance rates, number one being your driving record and whether or not you have had previous accidents where you were at fault. Other things that can affect the amount you will have to pay for auto insurance are:

Check Out Car Insurance Companies in Garden Grove and Reviews