Who Has the Cheapest Car Insurance Rates in Greeley?

Are you preparing to purchase auto insurance in Greeley, CO? Whether you just moved to the state, are planning to move soon, or are receiving a state driver’s license for the first time, it’s important to be familiar with Colorado’s auto insurance laws.

Before you register a vehicle in this state, you’re required to buy auto insurance. Even if you plan to drive only on an occasional basis, continuous coverage is necessary. Fortunately, there are a wide variety of companies that offer insurance, so it shouldn’t take long to find an option that fits your needs and your budget. The best way to start is by gaining a better understanding of how premium prices are set.

Because they are involved in a competitive market, you will find that insurance companies offer coverage at varying rates. Each one determines costs differently, but most consider a number of important factors. These include, but are not necessarily limited to:

One of the primary determining factors is often population density. Because more rural areas record fewer accidents, insurance companies commonly offer lower rates there. On the other hand, places with more drivers on the road often report more accidents, which makes providing inexpensive coverage riskier. While guidelines vary, it’s common for insurers to charge higher rates when the population density reaches over 5,000 people per square mile. With an overall population of 108,649 in 2019, Greeley, CO has a population of only 1,995 people per square mile. This is well below the standard, which makes it probable that drivers could see lower auto insurance rates in this area.

Insurance companies also often use commute times to help determine base rates for coverage. Longer driving times each day, especially in highly populated areas, provide more opportunity for accidents to occur. This incentivizes insurers to raise prices in areas with long commute times. While the relevance of this varies, drivers who live in cities with commutes exceeding the national average of 26.6 minutes are likely to pay higher premiums. From 2014 to 2018, the average travel time for workers 16 years and older in Greeley, CO was 23.4 minutes. Because this is so close to the national average, it’s difficult to determine whether or not it has much impact on the cost of insurance in this area.

Vehicle theft reports are another indicator insurance companies often use to determine rates. Drivers in cities where vehicles are frequently stolen are likely to see an increase in premiums. Fortunately, Greeley, CO, residents are unlikely to experience much of a difference based on this metric. The city was ranked #153 in the National Insurance Crime Bureaus (NICBs) 2018 Hot Spots Report Map. 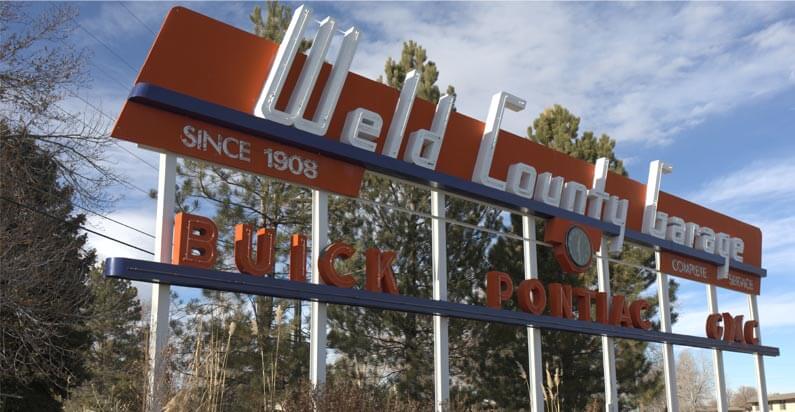 How Much Auto Insurance Coverage is Needed for Greeley Drivers?

Drivers must have a minimum of $25,000 of coverage for any single person injured in an accident and $50,000 for all persons injured per accident.

Drivers must have a minimum of $15,000 of coverage for property damage per accident.

It’s important to realize that liability insurance alone may not be sufficient coverage to protect you, your passengers, and your property. This is especially true if you are involved in an accident with an individual who is not properly insured. Even if they are found to be at fault, without additional coverage you could be responsible for all of your own medical fees, as well as vehicle repairs or replacement. As a result, it’s highly recommended that you acquire coverage beyond the minimum state requirements.

Insurance companies often compete for business, which means some offer lower rates than others. While local rates vary, Geico and State Farm Mutual are some of the cheapest options for drivers in Colorado. You should never select coverage based solely on price, however. Cost is important, but it is sometimes worth paying a little more to ensure you have a plan that suits your specific needs best. Additionally, an insurance provider’s service ratings and customer reviews should impact your final decision.

Because historic data shows that drivers with bad credit scores are more likely to file insurance claims, companies do tend to increase rates for Colorado residents in this situation. With proper research and requesting multiple quotes, however, it’s still possible to find reasonably priced auto insurance in the state. Geico, in particular, is known for offering lower rates to drivers with poor credit in Colorado.

Liability-only coverage means that you are only paying to cover the cost of damage that you do to other people and their property in the event you are at fault in an accident. It covers the costs of medical bills for people you injure or repair costs for property you damage.

It is a good idea to carry more liability insurance than these minimum amounts required by the state of {location-state} because you will be personally financially liable if you are in an accident and cause more damage to people or property than the state’s minimum required coverage levels.

There are two main types of coverage beyond liability coverage:

Collision – This type of insurance covers the cost of repairs to your vehicle or your property that you might damage in an accident in which you are at fault.

Comprehensive – This type of insurance covers the repair costs for your vehicle when one of those unusual things happen that are outside of your control, like weather-related damage to your vehicle, theft, vandalism, and deer stepping in front of your vehicle as you drive.

Top Factors and Differences Between the Types of Coverage

The difference between full and liability coverage is quite dramatic. With liability, insurers gamble that they will only have to pay for one car in an accident. With a comprehensive or full coverage policy, insurance companies know that they are taking on more liability exposure and so their rates reflect the increased risk. In the case of a comprehensive policy, they might even have to cover claims for damages that don’t arise from a traffic incident.

Additional cities in Colorado you can check out.

Find additional ways to save on your Greeley car insurance premiums with these insurance discounts:

These are the Common Reasons for Insurance Rates in Greeley CO

Use our guide to compare car insurance rates with tickets.

Check Out Car Insurance Companies in Greeley and Reviews