Which Company Has the Lowest Cost of Car Insurance in Cape Coral?

Cape Coral, Florida is a medium-sized city on Florida’s Gulf coast. The population is just under 200,000, which appears to be growing quickly. The average income is $54,000 and the median age of 46 reflects Florida’s reputation as a retirement haven. Cape Coral is a driver’s city, with an average of two cars per household and an average commute time of 26 minutes one-way. The city has an estimated 76,000 employees, which can be added to neighboring Ft Myers’ 30,000 workers for a total that exceeds 100k. Thus, the roadways in and around Cape Coral are quite busy.

Given the older population, drivers can generally feel safer on the roads. More mature drivers have been found to be more careful and overall safer citizens on the roads. Still, when drivers pass a certain age, their relative safety diminishes due to slowed response times and reduced overall awareness. Thus, drivers should carefully consider their auto insurance policy. This is especially true when other factors, such as auto theft, are considered.

Thankfully, the auto theft rate in the Cape Coral and Fort Myers area is quite low. In 2018, the national auto theft rank for the metro area was #244, representing a mere 1,122 stolen vehicles. Nevertheless, Southern Florida is known more for auto damage from weather events than from theft. This is where a comprehensive auto insurance policy can help drivers, even when their cars are parked in the driveway. 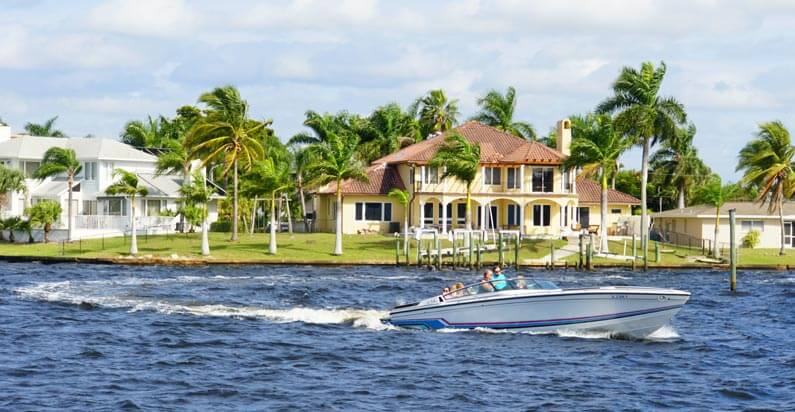 What Insurance Coverage is Needed for Drivers in Cape Coral

Florida, like almost every other state, requires that all drivers carry an automobile insurance policy before hitting the roads. This measure is designed to ensure that everyone can receive compensation if they are hit in an accident. For that reason, the Florida law only requires that drivers carry a liability policy.

Thus, when a driver is at-fault in an accident, their insurance will cover the other driver and their car. In fact, liability insurance policies are mandated to cover both property damage and bodily injury. While these claims are capped to only cover certain amounts, those caps are designed to help you deal with most situations.

While liability is the minimum required by law, it’s recommended that drivers consider increasing their coverage to the collision or comprehensive policy level. These policies cover the at-fault driver as well as covering other damage to the car from, say, falling limbs or theft. Lastly, when drivers have better coverage and are hit by another driver, they can make a claim on their insurance and immediately have their vehicle repaired. The two insurance companies then sort out compensation from the at-fault driver’s insurer, but your car will be fixed before that is done.

It’s important to save money on automobile insurance. Proper coverage is a necessary cost for any driver and even liability-only policies add to one’s monthly budget. However, drivers should consider more than the cheapest premiums. Other important factors include the customer service rating and the ability to package auto coverage with other policies, such as homeowner’s insurance.

How are insurance rates determined and getting cheap insurance close by.

Learn how bad credit can affect your car insurance rates.

Difference Between Liability and Full Coverage

Save on Your Insurance Policy Rates With These Discounts in Cape Coral:

Cape Coral drivers are likely to see their insurance rates change over time. There can be many factors, both positive and negative, that impact your regular premiums. One key thing that all drivers face is aging. As you mature as a person and as a driver, your insurance rates are likely to fall. Typically, older drivers are safer drivers. They are less likely to drink and drive, speed, or take unnecessary risks on the road.

Your rates are also dependent, in part, on the type of car you drive. Drivers who love high-powered sports cars will likely spend more for automobile insurance than those who drive less-exciting SUVs and sedans.

Rates are also tied to the deductible on the policy. If you carry collision or comprehensive (full) coverage and opt for a higher deductible, your premiums could be lower. That is, if a tree hits your car, you will pay more up front for the damage to offset the lower premiums you’ve been paying over time.

If you have a bad driving record and need cheap insurance, compare rates here.

Check Out Car Insurance Companies in Cape Coral and Reviews