Who Has the Cheapest Car Insurance Rates in Naperville?

When looking at insurance rates in any city, it’s good to understand what factors insurance companies consider when determining rates. Some of those factors have nothing to do with the individual driver and reflect trends in the city.

The U.S. Census estimates Naperville, IL, is home to about 148,000 people. Of those 16 years and older, the mean travel time to work is about 34 minutes. This is much higher than the national average of just under 27 minutes. Commutes are known for increasing accident rates, which can impact insurance rates. The longer the commute people in an area have, the more chances for accidents, which will increase the insurance rates.

Another common factor to keep an eye on is the number of vehicle thefts. The National Insurance Crime Bureau tracks thefts for a metropolitan area which includes Chicago, Elgin, and Naperville, ranking this area #133 in the nation when it comes to vehicle thefts. The estimated number of auto thefts in the area in 2018 was 22,688. In areas with high theft rates, insurers will charge more due to the risk. Having a lower ranking for theft can help bring rates down.

Looking at these factors, Naperville isn’t too bad in either one. However, the commute is a bit above average and the thefts are a bit high, though not excessively. Insurance rates may be slightly elevated over smaller areas not as close to a large city, such as Chicago, but they should still be competitive. 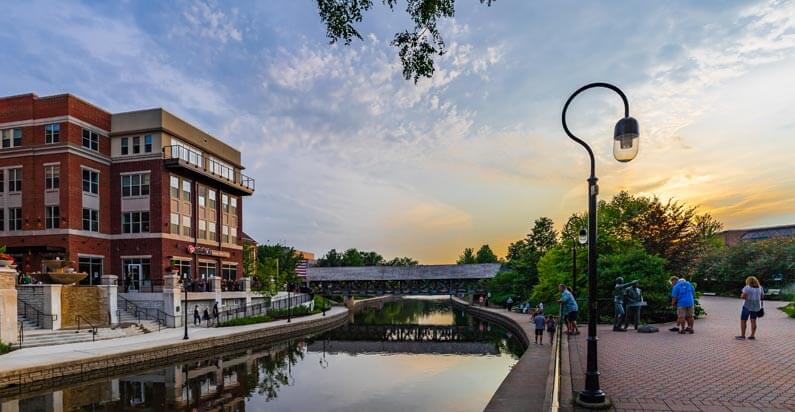 What Insurance Coverage is Needed for Drivers in Naperville

In Illinois, every driver must carry liability insurance, which will pay the damages and medical costs of other parties in an accident that is the driver’s fault. The Office of the Illinois Secretary of State explains the minimum insurance coverage is $25,000 per person and $50,000 per accident for bodily injury, and $20,000 for property damage.

Medical expense payments fall under bodily injury, while property damage covers any damage to vehicles or structures. However, this does not cover the driver who carries the insurance, so many people find that obtaining more than the minimum coverage is generally a good idea. Comprehensive and collision coverage will allow a driver to have insurance for their vehicle and personal medical expenses.

In addition, minimum coverage amounts are often too low to cover all of the damages from an accident though it may be enough in the event of a minor incident. Still, for serious accidents, costs can be triple the minimum coverage, which means the at-fault driver will have to pay out of their pocket for expenses that go above the insurance policy limits.

When shopping for insurance, it’s tempting to choose the company offering the lowest rates, but that’s not always a good idea. Cheap insurance may mean a policy that may not provide the right coverage to meet your needs. It also may indicate a company that isn’t responsive when you make a claim.

You should always look at the policy coverage and the company’s reputation before making a final insurance decision. Price is essential, and you shouldn’t overpay, but make sure you get the best value.

Car insurance companies use a range of factors when deciding what rate to offer a driver. The law bans the use of certain discriminatory factors, such as race, in making these decisions. However, companies can still use other pieces of information, such as location and age. In Illinois, companies can also use credit information. People with bad credit may find they have much higher insurance rates only due to their credit score and regardless of other factors, such as their driving records.

Do you have bad credit and need car insurance? Check out this guide to help you in your search.

Additional cities in Illinois you can check out.

Find additional ways to save on your Naperville car insurance premiums with these insurance discounts:

Insurance companies factor in many variables when determining your automobile insurance rate. They look at your age, type of car, marital status, gender, and driving record, among other factors. Age is a factor because actuaries have found that older drivers tend to be safer drivers, whether due to experience or caution.

Your type of car is also important. For instance, cherry red convertible sports cars in particular might have the highest insurance rates. On this note, be aware that you might pay a lower premium for driving the sedan version of a sporty, high-horsepower vehicle. Still, what matters most is how you drive your hot-hatch or family wagon.

That’s because your driving record is perhaps the biggest single factor in your insurance rate. It is certainly the one that you have the most control over. That is, the longer you can maintain an incident-free driving record, the lower your rates are sure to be. Incidents can be anything from a minor speeding ticket to a reckless driving charge to being at-fault in a major automobile accident.

Check Out Car Insurance Companies in Naperville and Reviews