Who Has the Cheapest Car Insurance Rates in Louisville?

Louisville is one of the largest cities in Kentucky. As an urban area, residents of Louisville experience thousands of thefts each year. In 2018, 5,046 vehicles were stolen; this ranked the state at 45th, with a per capita rate of 388.96 per 100k local residents. (Louisville was combined with Jefferson County, Indiana for the theft statistics.)

Residents, 16 years old and up, who have jobs outside the home experience a mean travel time to work of 22.4 minutes. At the end of their workday, they face a similar commute on their way home. When you account for a full 5-day workweek, that’s 3.73 hours a week of driving for single-vehicle homes and 7.47 hours for two-vehicle homes. And that is without including trips to schools, grocery stores, or out for entertainment.

All of this information affects the insurance costs for residents of the city. Anytime a claim is made on someone’s vehicle insurance, the company either pays out or denies the claim and, regardless of its decision on the claim, that person’s insurance may increase, especially if the driver who filed the claim is at fault. In the same way, a cities average commute time and number of thefts per year are considered when an insurance company sets a customer’s premium.

Car insurance isn’t cheap. Whether you opt for a less expensive annual premium or completely give up some insurance options such as coverage when you are hit by an underinsured driver, you’re going to be making some amount of insurance payments because it’s the law in Kentucky— as it is in nearly every state. Look around and find a plan that fits your needs and budget. 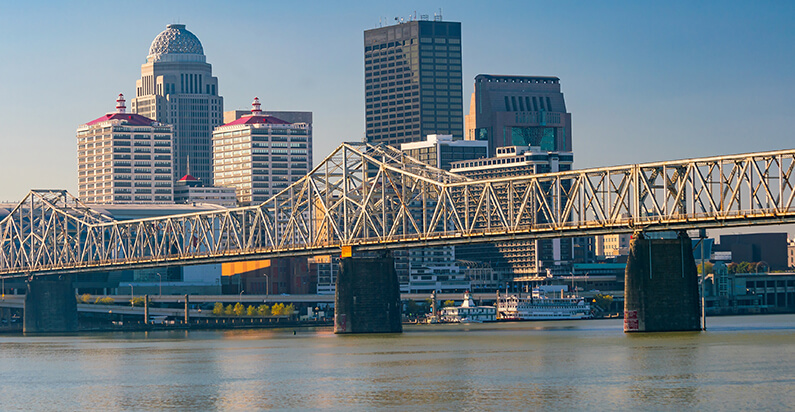 How Much Car Insurance Coverage Do I Need in Louisville

In this state, drivers can purchase a minimal annual plan that’s enough to cover the basics. However, if they are still paying a car loan off, the lending institution may require them to purchase comprehensive insurance on top of their liability plan. This is full coverage, which, depending on what the driver selects, can cost less than $1,000 annually.

The minimum liability all drivers are required to obtain is called a 50/100/50 plan which covers another vehicle in an accident where they are at fault. Specifically, in Kentucky, these plans cover $25,000 for a single injury in the other vehicle, $50,000 for multiple injuries of the driver and any passengers who are hurt in an accident, and $10,000 for property damage. This type of insurance is required, but if you are at fault in an accident, none of your costs will be covered.

With bad credit, you may find yourself limited in what level of coverage you can afford. Unfortunately, Kentucky is not one of the states that doesn’t allow insurance companies to use your credit to decide your premium. This means that you’ll likely pay more for car insurance until your credit score rises. However, it’s important to note that some companies allow you to split your payments up over the insurance period so that each payment is less. You may still end up paying more overall, but you’ll be able to switch as soon as a better option comes along.

Find out the which auto insurance company has the lowest rates for poor credit drivers.

What are the Major Differences Between Full Coverage and Liability?

Additional cities in Kentucky you can check out.

Tips to Get a Cheaper Car Insurance Rate

There are many car insurance discounts and ways to save on your policy in Louisville:

Use this guide to find discounts here.

Your car insurance rate in Louisville KY is based upon many factors. You will be charged more or less on your policy based upon your age, marital status, and your number of moving violations and accidents. You will also be charged by the carrier based upon the type of vehicle you drive, whether it is paid for or not, and whether you decide that it is cost effective and prudent to have collision insurance or not. Also, insurance agency rates are highly variable, based upon the company and what area of the country you live in. Those in rural areas often pay less, while people in large, metropolitan cities often pay more. Armed with knowledge and by shopping around, you overcome some of these factors and save substantial money each year on auto insurance.

Learn how citations can affect your insurance premiums here.

Check Out Car Insurance Companies in Louisville and Reviews