What is the Average Cost of Car Insurance in St. Paul?

St. Paul, MN is the often-overlooked neighbor and twin city to Minneapolis. However, this is a medium sized town in its own right. St. Paul has a diverse population of over 300,000 and a median age of 32.6. Nearly half of the citizens own their homes. Drivers in St. Paul all need insurance, however, and those policy rates are based on many factors including average commute and auto theft rates, on top of individual concerns like driving record and credit scores.

In fact, the average commute for a St. Paul worker is 22.5 minutes for a one-way trip to work. For those who commute into Minneapolis or elsewhere in the Twin Cities region, the commute could take as much as 24 minutes. For those drivers, their one-way average could calculate to as much as 480 or more minutes per week for a two-car, two-earner household. When other drives such as grocery trips, activities, and leisure trips are added, a home could log 600 or more minutes of driving in any given week. Actuaries then use these figures to arrive at insurance premiums.

When it comes to auto theft, St. Paul drivers need to heed the statistics. In 2018, the area saw 8,734 thefts and an overall theft rate of 240 per every 100k residents. This launched St. Paul to #130 nationally. Drivers should note that if their car is damaged during a theft, that damage is not covered by basic liability insurance. 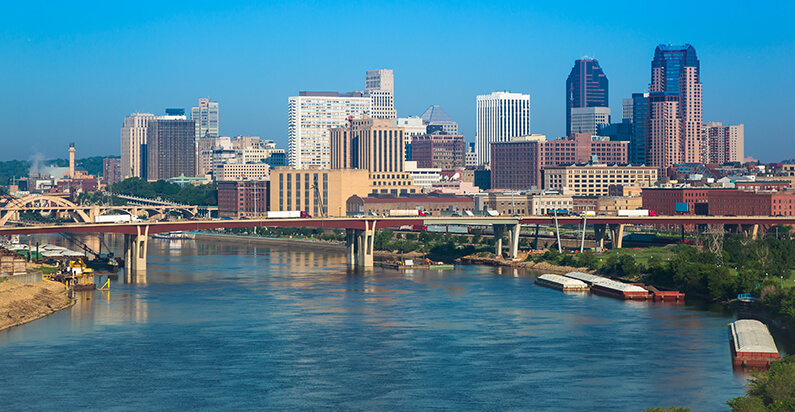 What is Required for St. Paul Drivers?

The hustle and bustle of St. Paul Minnesota never seems to stop. Commute times only seem to get longer and there are always more errands to run, making car insurance a vital part of daily life. Though invisible, solid car insurance policies protect everyone. Thus, the state mandates that every St. Paul driver carry a minimum level of coverage. This coverage falls under the heading of a liability policy.

Liability policies have a limited scope, however. As the name might imply, a liability policy only covers damages for which the driver is liable. Any repairs to the at-fault driver’s automobile are thus not covered. Further, when a driver only has liability and is the victim of an accident, they must wait until the at-fault driver’s insurer fully processes the claim to get their car damages or medical bills covered. It is recommended that drivers opt for collision or comprehensive coverage that will cover any repairs to their car no matter the cause.

Saving money on car insurance can be a vital part of any household budget. However, cheaper doesn’t always mean better. That is, some more expensive auto policies might be with companies that can offer bundled packages that may be cheaper overall. The following chart details the cheapest insurance possible in Minnesota.

Compare all car insurance company rates near you here.

Drivers with bad credit not only need to work with their creditors to fix their finances, but they must also endure higher automobile insurance premiums. The following chart can help drivers find the best option for their insurance needs. With lower insurance costs, drivers may be able to clear up old debts or otherwise amend their credit woes.

Learn about how your credit score can negatively impact your insurance rates.

What is Full Coverage Car Insurance?

Liability-only insurance is the least amount of insurance that one can purchase. This satisfies your legal requirement to drive and register your vehicle in Minnesota. For many people, this is not sufficient coverage because it does not cover their losses if they are at fault and do damage to their own vehicle or if they sustain damages in a hit-and-run or from an uninsured driver.

Collision covers when one is at fault and their own vehicle is damaged. If you have a car that is worth more than a few thousand dollars, it is often a wise investment to buy collision insurance each year. However, collision insurance coverage is pricey and will increase your insurance cost per year quite drastically.

Comprehensive covers those oddball things that happen that you cannot control, like damaged windshields and collision with animals on the road. It also covers your loss when someone purposely damages your vehicle in an act of vandalism. In addition, comprehensive covers theft of your vehicle, fire and weather, or acts of nature. An example of the latter would be if your car was crushed under a tree that fell in a wind storm.

Additional cities in Minnesota you can check out.

Find additional ways to save on your St. Paul car insurance premiums with these insurance discounts:

Use our guide to find discounts and lower your insurance premium costs.

Reasons that Affect Your Automobile Insurance Rates in St. Paul

Because of the traffic issues in the area, “State” car insurance rates can be quite high based on the area you live in. The risk factors are higher where there is more traffic, so the area is one important factor in your auto insurance rates. As we have seen, other factors that affect your car insurance rate include your age, marital status, how many cars and drivers you have in your household, your driving record, what type of coverage you need, the age and type of your vehicle, the insurance agency, and the average mileage you drive each year. These factors can make huge differences in how much money you have to spend each year on automobile insurance.

Since insurance rates can fluctuate from company to company, it is imperative that drivers thoroughly educate themselves about automobile insurance and shop around in order to find the very best deal. You literally can save a thousand or more dollars per year by getting quotes from several carriers.

Learn how driving violations can affect your car insurance rates.

Check Out Car Insurance Companies in St. Paul and Reviews