Who Has the Cheapest Car Insurance Rates in Kansas City?

Kansas City, MO is a growing town of approximately 490,000 citizens. It’s a slightly older town than some when it comes to demographics, with a median age of 35, and approximately half of all local residents own their homes. With such good numbers in its favor, Kansas City drivers are likely to have favorable rates on their automobile insurance. However, other factors must be weighed such as auto theft rates, average commuting time, and individual credit scores.

In fact, Kansas City Missouri ranks rather high for auto theft. In 2018, their numbers landed them at #29 nationwide for car theft. A total of 9,712 cars were stolen in that year. When weighed against the total population, the 2018 car theft rate was 453 per 100k residents. On the other hand, Kansas City’s citizens have one factor in their favor: commute times.

In Kansas City, the average commute time is a rather low 21.2 minutes. When adjusted for a five-day workweek in a household of two full-time workers, that works out to 424 total minutes driving to and from work. That is lower than other cities, but when other trips are added, the total time likely exceeds 500 minutes per week per home. When added to the risk of car theft, this might raise an eyebrow or two for an insurance professional. In fact, the numbers raise a little when one tallies the commute for the entire Metro Statistical Area where average commutes are 22.2 minutes, one-way.

Drivers in Missouri, and Kansas City in particular, also face another challenge when it comes to insurance premiums: credit scores. Drivers with bad credit can pay an average of $1,250 more than their friends with good credit, and they even pay significantly more than those with good credit but a DWI. 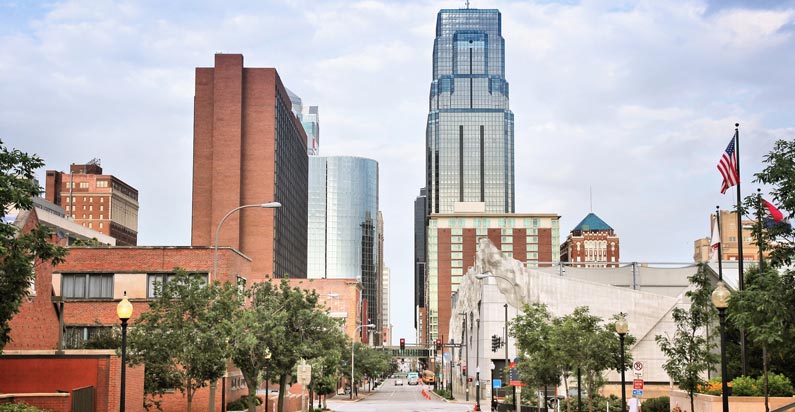 How Much Car Insurance Coverage Do I Need in Kansas City

Kansas City’s busy streets, highways, and byways are nearly always full of drivers hustling to get to work, shopping, or on any sort of errand. With more drivers and more time on the road, Kansas City drivers thus increase their chances of an accident. While unfortunate, it’s possible that any driver out there could cause an accident. Thus, Missouri law requires that all drivers carry a minimum level of automobile insurance.

The minimum coverage falls under the category of liability insurance. With a liability-only policy, drivers are covered when they cause damage to another automobile. The state has set minimum levels for this coverage so that most accidents should be fully covered. However, the at-fault driver’s auto is not covered under such a liability policy. Their auto is not even covered if it is damaged in a hit-and-run, theft, or an act of nature. All drivers should consider a collision or comprehensive auto policy.

While GEICO and Missouri Farm Mutual Auto Insurance lead the pack when it comes to cheap and affordable automobile insurance, there are plenty of options available for drivers in Kansas City. However, just because a company offers lower rates doesn’t mean they are necessarily the best choice for all drivers. Other companies might offer a better value when an auto policy is bundled with homeowner’s insurance, for example.

Use this expert guide to find the best auto insurance companies with the lowest rates.

Unfortunately, drivers with bad credit in Kansas City will find that their insurance policies are more expensive. Their policy might even be more expensive than a driver’s with excellent credit but a poor driving record. Kansas City drivers should seek out the lowest cost, yet highest-value insurance policy so that their car is covered while they settle their financial matters.

Full coverage auto insurance in Arizona pays for your injuries and the damages made to your car as well as for others and isn’t just a specific type of a policy but it is instead liability, comprehensive insurance, and collision all combined. Full coverage insurance is not mandatory, but is good to have since it will help pay for your car to be fixed in the event of an accident that causes you injury or damage to your car, even if you were at fault. If the other person that collided with you was at fault, then their insurance will cover the damages to your car and your injuries. This is why there are laws requiring everyone to have insurance to cover the damages they cause.

Additional cities in Missouri you can check out.

Save on Your Insurance Policy Rates With These Discounts in Kansas City:

To take advantage of all discounts on premiums, check out this guide.

Use this guide to compare top insurance company rates if you have a bad driving record.

Check Out Car Insurance Companies in Kansas City and Reviews