Which Company Has the Lowest Cost of Car Insurance in New York City?

New York, NY is the hub of American business, art, and culture. Other cities may compete, but they seldom compare to the sheer size and grandeur that is New York City. With a population of 8.4 million within the city limits and a metro area that holds a mind-boggling 20 million citizens, drivers face lots of traffic, parking difficulties, and other struggles in their daily life. In the face of these difficulties, New Yorkers must carry automobile insurance so that they comply with state law and so that everyone can have their vehicle repaired in the event of an accident.

While most people in New York City commute to work using public transportation, those in the greater New York-Newark-Jersey City, NY-NJ-PA metro area spend an average of 35.8 minutes driving one way to work every day. This is much higher than most metropolitan statistical areas, which tend to be somewhere in the mid-20-minute range, if not lower. Interestingly, NYC households have an average car ownership of zero while those in the metro area have two cars per home.

However, the New York-Newark-Jersey City, NY-NJ-PA area ranks rather low for automobile theft. In 2018, the area ranked #299 nationally for theft. Though there were 19,789 cars stolen in 2018, the population-adjusted rate is only 99 per every 100k residents. This is good news for drivers who may face repairs and insurance claims stemming from auto theft.

New York drivers need to watch out for their credit scores, however. New York motorists with poor credit are subject to significantly higher premiums based on outstanding debts or past financial difficulties. Those with poor credit scores can pay more than double the premiums of a driver with excellent credit. They can even pay more than $500 more than a driver with excellent credit and a DWI. Thus, credit-challenged drivers need to do their research to find the lowest possible rates so that they can amend their financial situation. 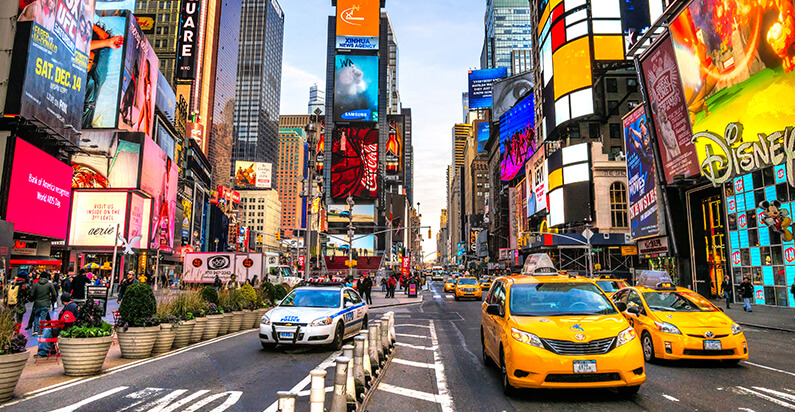 What is Required for New York City Drivers?

For those brave enough to drive in New York City, or hearty enough to weather the snowy conditions that visit upstate New York state each year, car insurance is a necessity. In fact, New York State law requires that all drivers carry a minimum level of coverage. In fact, drivers who are found to be driving without insurance are subject to fines, tickets, and possible loss of their license. Thus, insurance companies offer liability policies for those who are only looking to pay to meet the minimum state requirements.

However, drivers with liability-only policies are not themselves covered by their own policy. If their cars are damaged due to sliding off a snowy, icy road, they must cover the repairs with their own funds. They must also cover their own medical bills when involved in a single-car crash or if they’re injured as a result of hitting another car.

Bad credit causes trouble for drivers whether they’re on or off the road. New York insurance companies adjust their premiums according to every driver’s individual credit rating, in addition to considering driving record, zip code, and more. Use the following chart to find the lowest cost insurance so that insurance premiums don’t interfere with your efforts to amend your credit.

Use this guide to find cheap auto insurance coverage with bad credit.

Liability-only insurance is the least amount of insurance that one can purchase. This satisfies your legal requirement to drive and register your vehicle in New York. For many people, this is not sufficient coverage because it does not cover their losses if they are at fault and do damage to their own vehicle or if they sustain damages in a hit-and-run or from an uninsured driver.

Collision covers when one is at fault and their own vehicle is damaged. If you have a car that is worth more than a few thousand dollars, it is often a wise investment to buy collision insurance each year. However, collision insurance coverage is pricey and will increase your insurance cost per year quite drastically.

Comprehensive covers those oddball things that happen that you cannot control, like damaged windshields and collision with animals on the road. It also covers your loss when someone purposely damages your vehicle in an act of vandalism. In addition, comprehensive covers theft of your vehicle, fire and weather, or acts of nature. An example of the latter would be if your car was crushed under a tree that fell in a wind storm.

Additional cities in New York you can check out.

The following auto insurance discounts can be used to help lower your premiums in New York City:

Using this guide to take full advantage of all driver discounts.

What are the Factors that Affect Your New York City, NY Car Insurance Premiums

There are many factors that affect your insurance rates, number one being your driving record and whether or not you have had previous accidents where you were at fault. Other things that can affect the amount you will have to pay for auto insurance are: