Who Has the Cheapest Car Insurance Rates in Raleigh?

Raleigh, NC is the bustling capitol of the Tar Heel State. With the advent of the Research Triangle Park, Raleigh has become a hub for technology and innovation. While the city itself has a population of 470,000, the metro statistical area boasts over 1.3 million. Given that the city is such a hub of economic activity, on any given day drivers can expect a significant addition to traffic from visiting businesspeople and others. When purchasing an insurance policy, Raleigh drivers need to heed not only drive times and traffic, but also auto theft rates and even summer thunderstorms which impede driving and otherwise pose a danger to their cars.

When it comes to commute times, drivers in the city proper average 22.5 minutes for a one-way commute. When the lens pans out to take in the metro area, drivers are shown to drive 24.5 minutes for work. These figures average to 23.5 minutes, which makes a total of 470 minutes per week for a two-car household, assuming two workers per home. When errands, activities, and leisure driving are added, that figure might increase to 600 minutes of drive-time per home. That adds up to a lot of risk, and potentially higher premiums for an auto policy.

When it comes to auto theft, the Raleigh metro area fares well. In 2018, Raleigh tallied only 1,812 thefts and was nationally ranked #258. The area is safer for drivers and their cars than many towns in North Carolina. Even their neighbors in Durham-Chapel Hill are ranked far higher, at #144, and Charlotte is ranked #152 for auto theft.

Keep reading this page to learn even more about automobile insurance in Raleigh, NC. 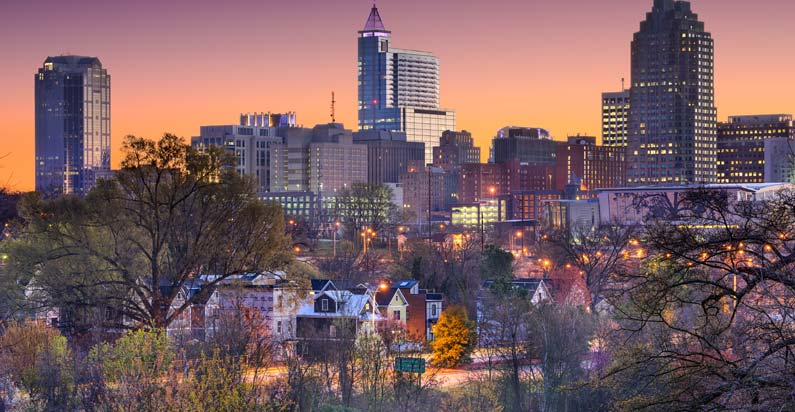 What is Required for Raleigh Drivers?

Every driver in Raleigh, NC is required by state law to have an insurance policy. This is because the risk of accident is large enough that everyone needs to be accountable in case they cause an accident. Given that the city is so busy and that commute times only seem to increase, drivers are smart to carry extra coverage if possible, just in case. State law requires that drivers at least be held liable for any damage they cause while on the road. Thus, the minimum coverage is satisfied with a liability policy.

These liability policies only cover damage done to other cars, not the policyholder. Thus, while liability policies are cheaper, they are not necessarily recommended as a standalone. When drivers upgrade their policies to collision or comprehensive coverage, most any damage to their car can be covered. For example, damage from a hit-and-run, auto theft, or an uninsured motorist can be repaired immediately. Since Raleigh often experiences high winds and thunderstorms, drivers will be smart to be insured in case flying debris damages their car.

Cheap and affordable auto insurance rates are always a welcome addition to any household budget. The following chart details the lowest cost car insurance companies for drivers in North Carolina. Keep in mind that the lowest premiums might not add up to the service everyone needs. Higher cost companies might provide other services such as comprehensive insurance packages that cover multiple assets or easy-to-access customer service who can explain your liability in a situation or help you resolve a case quickly.

When a North Carolina driver finds themselves with bad credit, they are also likely to find that their car insurance is more expensive. In fact, great drivers who may have bounced a check or two often have higher car insurance rates in many states. However, here are some car insurance options that can help drivers reduce insurance costs while they amend their credit scores.

Want to know how your credit score affects your insurance rates, click here to learn more.

Additional cities in North Carolina you can check out.

The following auto insurance discounts can be used to help lower your premiums in Raleigh:

Learn more about car insurance discounts with this guide.

Your car insurance rate in Raleigh is based upon many factors. You will be charged more or less on your policy based upon your age, marital status, and your number of moving violations and accidents. You will also be charged by the carrier based upon the type of vehicle you drive, whether it is paid for or not, and whether you decide that it is cost effective and prudent to have collision insurance or not. Also, insurance agency rates are highly variable, based upon the company and what area of the country you live in. Those in rural areas often pay less, while people in large, metropolitan cities often pay more. Armed with knowledge and by shopping around, you overcome some of these factors and save substantial money each year on auto insurance.

Check Out Car Insurance Companies in Raleigh and Reviews