What is the Average Cost of Car Insurance in Columbus?

Approximately 328,000 people call Columbus, Ohio home. It’s not only the state capital, but also the city with the highest population in Ohio. Columbus also serves as Franklin County’s county seat. As with most states, the cost of car insurance is dependent on many factors in Ohio, including the average commute in an area and the car theft rate.

The mean travel time to work is just over 23 minutes. This means that a household with a single vehicle, that vehicle will spend 3.85 hours on the road each week just to get to work and back. In a 2-vehicle household, this doubles to 7.7 hours spent on the road. And that’s before you include trips for school activities, groceries, and general entertainment.

In 2018, Columbus ranked 116th out of all national metropolitan statistical areas for the number of vehicle theft. There were 5,437 vehicles stolen in total that year, making the per capita rate 258.1 per 100k residents. This puts the city in the average rather than the high-risk category for this crime. 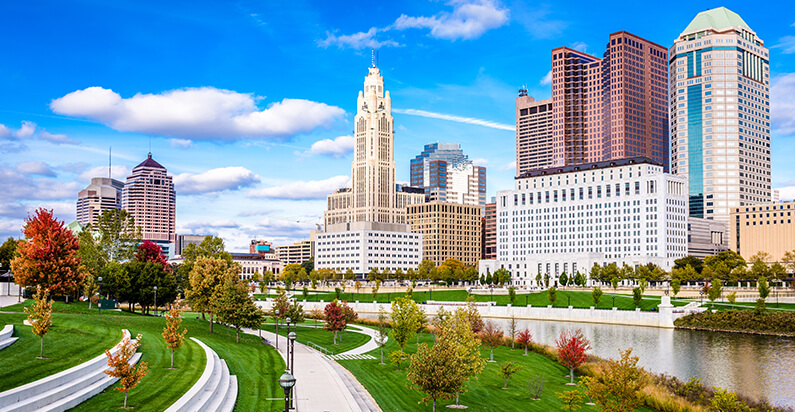 How Much Car Insurance Coverage Do I Need in Columbus

Ohio requires motorists to carry a minimum of $25,000 in bodily injury liability (BIL) insurance for the death or injury of one person, $50,000 in BIL insurance for the deaths or injuries of two or more people, and $25,000 in property damage insurance. These amounts refer only to damage caused by the motorist to others, not for their own injuries or vehicle damage in an accident for which they are found to be at-fault. Most drivers should purchase more than the mandatory minimum to protect their personal assets in the event of a serious crash.

If you own your car outright, you aren’t required to carry collision and comprehensive insurance. However, if your vehicle is leased or you still owe payments on it, your lessor or lender will almost certainly require you to purchase this coverage to protect their interest in the car.

Everyone wants cheap car insurance. However, cheap car insurance is not one-size-fits-all. The cheapest car insurance for a friend or family member may not prove right for you because of your driving history. Credit scores also play a role. A driver with good credit will pay less for insurance, all other things being equal, than someone with less than stellar credit. Fortunately, you can improve your credit score by paying down debt and taking other measures, thus lowering your insurance rates over time.

The average car insurance rate in Columbus is $1,304, which is somewhat cheaper than the premiums for car insurance in other Ohio cities. It is considerably below the national average of $1,679.

Check out our guide to find cheap auto insurance rates close by.

While you are working to boost your credit score, you can still find relatively low-cost auto insurance in Columbus, Ohio. Compare insurance quotes to find the carrier offering the best rates based on your information.

Find out how your car insurance rates are impacted with bad credit.

What does Full Coverage Insurance Cover?

Additional cities in Ohio you can check out.

Tips to Get a Cheaper Car Insurance Rate

Save on Your Insurance Policy Rates With These Discounts in Columbus:

Using this guide to take full advantage of all driver discounts.

Your car insurance rate in Columbus, OH is based upon many factors. You will be charged more or less on your policy based upon your age, marital status, and your number of moving violations and accidents. You will also be charged by the carrier based upon the type of vehicle you drive, whether it is paid for or not, and whether you decide that it is cost effective and prudent to have collision insurance or not. Also, insurance agency rates are highly variable, based upon the company and what area of the country you live in. Those in rural areas often pay less, while people in large, metropolitan cities often pay more. Armed with knowledge and by shopping around, you overcome some of these factors and save substantial money each year on auto insurance.

Find the best insurance rates with tickets and accidents using this guide.

Check Out Car Insurance Companies in Columbus and Reviews