Who Has the Cheapest Car Insurance Rates in Philadelphia?

Do you currently live in Philadelphia, Pennsylvania? Or maybe you are planning to move there in the near future? Whatever your situation, it is absolutely imperative that you become familiar with the state’s driving laws. You will also need to secure auto insurance, as driving without it can result in a $300 fine and the suspension of your driver’s license, registration, and license plate for up to three months. Auto insurance rates can vary drastically from city to city, so it is worth thoroughly researching all your options. Factors that tend to impact premiums include population density, average worker commute times, and theft reports.

Typically, cities with lower population densities have cheaper insurance premiums. This varies, of course, but the cost of coverage in locations with fewer than 5,000 people per square mile does tend to be lower than in areas with more residents. Philadelphia, Pennsylvania, for example, had a population of just over 11,379 per square mile in 2010 and is known to be a city with some of the most expensive car insurance in the state.

Commute time for workers age 16 and older in the city are also likely impacting the high cost of car insurance in Philadelphia, Pennsylvania. Between the years of 2014 and 2018, the mean travel time to work was over 33 minutes. Insurance companies often keep this in mind when establishing prices, as increased travel time means more opportunities for accidents to occur. And those who live in Philadelphia commute more than five hours every week in a single-vehicle household and over 10 hours in a 2-vehicle household. 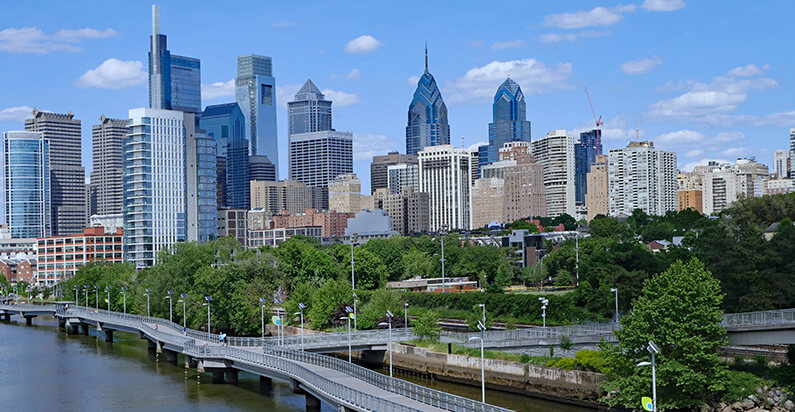 How Much Car Insurance Coverage Do I Need in Philadelphia

All Pennsylvania drivers are required to have at least the minimum amounts of coverage for their vehicles when it is on the road. New residents have a limited number of days to comply after establishing residency, so you need to be acutely aware of this if you have just moved or are planning to soon.

First Party Benefits provides a variety of medical benefits. The state also wants drivers to have Uninsured and Underinsured Motorist Coverage of $15,000 per person and $30,000 per accident. Drivers can, however, request to reject these coverages.

Philadelphia, Pennsylvania may have some of the highest auto insurance rates in the state, but some coverage options are cheaper than others. While individual premiums will vary, Nationwide Property and Appraisal Services LLC offers drivers some of the least expensive rates for both minimum and full coverage. GEICO and State Farm Mutual Auto Insurance Company may also provide reasonably priced solutions.

Insurance companies in Pennsylvania are allowed to use driver credit scores when determining individual auto insurance premiums. If you have bad credit, this does not necessarily mean you will be stuck paying more per month. It does, however, mean you should research each option carefully before finalizing your coverage. On average, GEICO tends to offer the best rates for drivers in this situation.

Learn how a bankruptcy affects your credit and auto insurance rates.

Additional cities in Pennsylvania you can check out.

Save on Your Insurance Policy Rates With These Discounts in Philadelphia:

Use our guide to find discounts and lower your insurance premium costs.

Your car insurance rate in Philadelphia, PA is based upon many factors. You will be charged more or less on your policy based upon your age, marital status, and your number of moving violations and accidents. You will also be charged by the carrier based upon the type of vehicle you drive, whether it is paid for or not, and whether you decide that it is cost effective and prudent to have collision insurance or not. Also, insurance agency rates are highly variable, based upon the company and what area of the country you live in. Those in rural areas often pay less, while people in large, metropolitan cities often pay more. Armed with knowledge and by shopping around, you overcome some of these factors and save substantial money each year on auto insurance.

Check Out Car Insurance Companies in Philadelphia and Reviews