Which Company Has the Lowest Cost of Car Insurance in Long Beach?

Are you trying to find a good rate on car insurance in Long Beach, California? While California is not considered a cheap place to live in the United States, many residents do enjoy lower premiums than drivers elsewhere. There are many factors that impact the total cost of insurance throughout the state and rates often vary drastically between cities.

Population plays an important role in determining insurance rates. Cities with lower population density often usually have cheaper insurance premiums. In particular, locations with fewer than 5,000 people per square mile have the lowest average rates. In 2019 Long Beach was home to an estimated 462,628 people, which means there were approximately 9,199 people per square mile.

However, the population size is often correlated with higher premiums because of the way it affects other factors. Such as commute; the average amount of time workers spend traveling to and from places of employment is significant. More time on the road increases the opportunity for accidents. Between the years 2014 and 2018, Long Beach workers, age 16 and older, had an average travel time of just over 30 minutes.

Additionally, fewer occurrences of vehicle theft often correlate with lower car insurance rates. It is important to realize, however, that this varies and is not the case for every state and city. According to the National Insurance Crime Bureau (NICB), with 53,928 car thefts reported in 2018, the Los Angeles, Long Beach, Anaheim metropolitan statistical area ranks #38 in car thefts among cities in the United States. 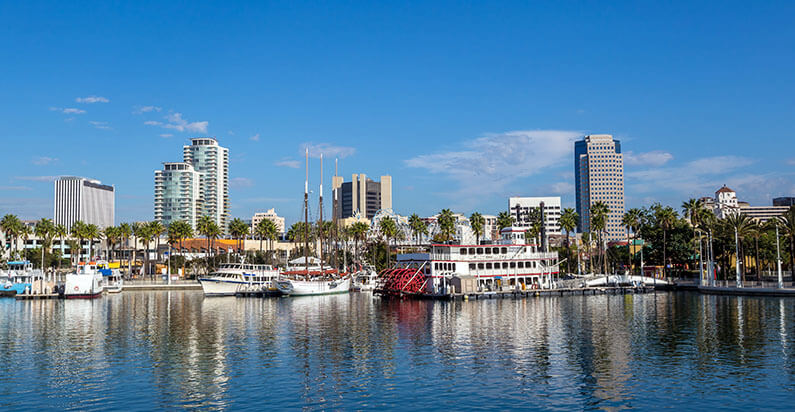 What are the Insurance Requirements in Long Beach?

California is considered a fault state, meaning all parties involved in the accident will file claims through the insurance company representing the individual deemed responsible. The state has a number of minimum insurance requirements to help keep all drivers safe.

While these minimums are required by the state, it is recommended that drivers secure additional coverage to meet their unique needs. It is also important to realize that liability insurance doesn’t cover bodily injuries or property damage sustained by you, your passengers, or your vehicle during an accident caused by you. It only covers whoever is not deemed to be “at fault”.

Cost should never the sole determining factor when considering which car insurance to buy, but finding a good rate is important. Whether you want minimum or full coverage, the company offering the cheapest solution for California drivers is Geico. When compared to other companies, Geico’s rates are significantly lower than those offered by the next cheapest option, United Financial.

Use this guide to compare the best auto insurance premiums by company.

Unlike many other states, insurance companies in California are not permitted to use drivers’ credit scores to determine premium costs. Instead, providers must set prices based on other factors, including customer driving records and the number of miles driven per year. For drivers in Long Beach, California, a bad credit history will not impact the cost of insurance.

Learn how bad credit can affect your car insurance rates.

Additional cities in California you can check out.

The following auto insurance discounts can be used to help lower your premiums in Long Beach:

Learn more about car insurance discounts with this guide.

As you can see, car insurance rates are influenced by a complex set of factors, all of them are determined by risk data for each insurance agency. How much each agency charges, though, based upon similar risk data, can vary widely. In the case of younger drivers, they can save literally thousands of dollars each year by shopping around. The insurance agencies will charge drivers different rates for their automobile insurance premiums by their age and marital status, driving record, area they live in, and whether they carry liability-only or full coverage insurance. If the customer opts for collision insurance, the carriers will charge more for a lower deductible.

Learn how a bad driving record can affect your car insurance rates.

Check Out Car Insurance Companies in Long Beach and Reviews