Who Has the Cheapest Car Insurance Rates in Clearwater?

Clearwater, FL is a medium-sized city that is nestled in the greater Tampa-St. Petersburg metro area. The city of Clearwater is comprised of only 112,000 citizens, which is a fraction of the metro area’s 3.14 million. Of those, just under half (51,000) are considered employees who are likely to commute to work in their cars.

Those trips take an average of 22.6 minutes one way. Thus, a two-car household with two employees logs as many as 7.5 hours per week just getting to and from work. When trips for shopping, socializing, and recreation are tallied, that number can easily exceed 10 hours on the road per week. While Clearwater’s commute time is below the national average of 26 minutes for a one-way trip, this is still a significant statistic that factors into insurance rates.

Another piece of the insurance premium puzzle is auto theft. The Clearwater-Tampa-St. Petersburg auto theft rate is rather good, relative to some other metro areas. They are ranked #213 nationwide for auto theft and, in 2018, the area recorded a total of 5,400 stolen cars. Drivers might want to consider these facts before settling for the minimum auto insurance coverage.

In fact, since the median age in Clearwater is 44, insurers are likely to view those drivers with more favor, as mature drivers are thought to be safer and lower risk. On the other hand, very old drivers start to pose more risk as their hearing and eyesight decline. Further, Florida is known for extreme weather events, such as hurricanes, that do terrible damage to cars and homes in the area. 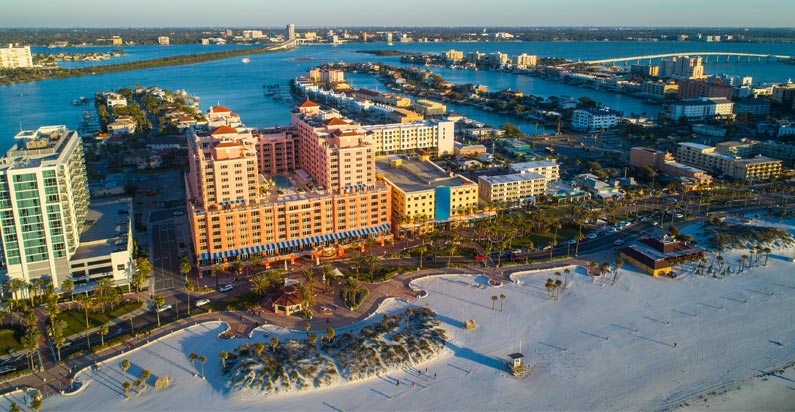 How Much Auto Insurance Coverage is Needed for Clearwater Drivers?

Just like most states, Florida drivers must carry a minimum level of automobile insurance. To legally drive, every motorist should have at least a liability policy on their automobile. These policies do what their names imply, they cover a driver’s liability should they damage another person, property, or automobile. Qualifying policies should cover bodily harm to a minimum amount of $10,000 and $20,000 per accident. Property damage should be covered to a minimum amount of $10,000 per crash.

Liability policies thus do not cover any bodily or property damage incurred by the at-fault driver in an accident. They must cover those costs with other insurance or out-of-pocket. Therefore, it’s recommended that Clearwater drivers add collision or comprehensive coverage to their policies if they can afford to. Collision or comprehensive policies help even when a driver is not at-fault. When a car is hit, the driver can immediately begin the repairs process without having to wait for the at-fault driver’s insurance company to settle the claim. In the time it takes the two insurance companies to sort out the claim, the car can be repaired and back on the road.

Every household budget seeks to reduce reoccurring costs such as the cable bill, power, and automobile insurance. Thus, it’s vital to review the following chart of the cheapest car insurers in Clearwater, FL. However, keep in mind that low premiums are not necessarily the be all, end all of car insurance. That is, it’s also important to review a company’s customer service rating and the various packages they offer for homeowners, renters, etc.

Are you looking for a cheap car insurance quotes? Compare rates for all companies here.

Are you looking for cheap insurance with bad credit? Check out this guide.

Why You May Want Full Coverage Car Insurance

Save on Your Insurance Policy Rates With These Discounts in Clearwater:

Reasons that Affect Your Automobile Insurance Rates in Clearwater, FL

Learn how driving violations can affect your car insurance rates.

Check Out Car Insurance Companies in Clearwater and Reviews