Which Company Has the Lowest Cost of Car Insurance in Miami Gardens?

In Florida, as in other states, car insurance is mandatory, no matter your situation. If a car owner lives paycheck to paycheck or has bad credit, they are still required to have car insurance if they own a vehicle they plan to drive.

Miami Gardens is a city in Miami-Date County, where residents live, work, have fun, and pay their bills. However, its statistics (crime, car thefts, and accidents) are grouped in with the much larger city of Miami.

The population of Miami Gardens is right around 110,000, making it a relatively large city. The average commute time for workers 16 and older is slightly over half an hour at 32.3 minutes. Considering the national average is only around 27 minutes, this can add quite a bit of time to how long commuters spend in their cars, and on the road, every week. This increase may lead to higher premiums for those who live in the area.

In 2018, residents reported 20,045 vehicle thefts, making the rate of theft in the city quite high, which can also have a negative impact on insurance costs. The overall rate was 323.37 per 100,000 vehicles and the city was ranked was #72 of cities with the highest theft rates in the US. 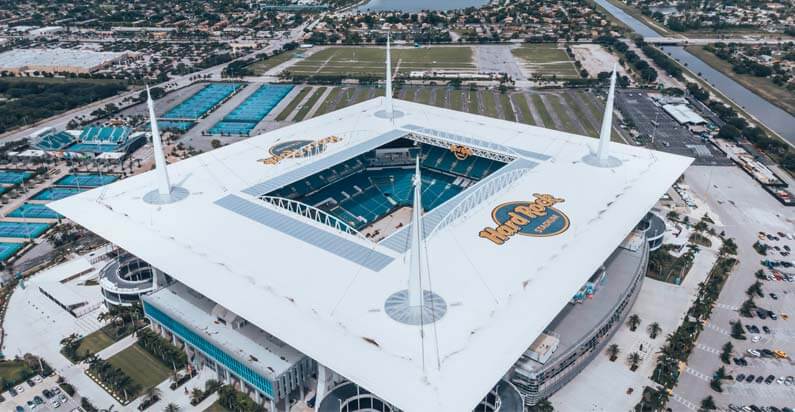 How Much Car Insurance Coverage Do I Need in Miami Gardens

Florida, unlike many states, doesn’t use an at-fault insurance system, but that doesn’t mean that you can drive without insurance. Even Florida has requirements for how much insurance you must carry if you plan to drive on the roads. However, these requirements are quite low compared to other states.

Florida only requires drivers to carry $10,000 in personal injury protection (PIP) and another $10,000 in property damage protection. Considering some states require as much as $50,000 in PIP, these requirements should be easy to meet.

However, there are reasons to consider buying more coverage. For one, Florida is regularly hit by hurricanes and flooding, especially if you live on the coast. This means that you may suffer property damage to your vehicle and, depending on your coverage, you could pay all of that out of pocket or expect it to cover most of the damage. If you chose a less-expensive insurance plan, then you may still wind up paying beyond your deductible to have the damage to your vehicle repaired.

If you have no choice but to begin with a less expensive insurance premium, you may want to treat it as a beginner premium. When you have more money to work with, you can get back in touch with your agent and upgrade your plan so that it offers you more protection. However, if you need insurance now and need to keep within a certain budget, here’s a good place to start.

Bad credit or not, you are still required to buy insurance. The state may not provide vehicle registration to you if it has proof that your vehicle is not insured, so it’s best to start looking right away if you plan to move here, are just getting your license, or were dropped from your previous insurance plan. Several companies in Florida offer insurance plans for drivers with bad credit. While these are sometimes more pricey, you might consider dividing the cost into smaller payments in order to make them easier to pay.

Use this guide to find cheap auto insurance coverage with bad credit.

What does Full Coverage Insurance Cover?

Full coverage auto insurance in Arizona pays for your injuries and the damages made to your car as well as for others and isn’t just a specific type of a policy but it is instead liability, comprehensive insurance, and collision all combined. Full coverage insurance is not mandatory, but is good to have since it will help pay for your car to be fixed in the event of an accident that causes you injury or damage to your car, even if you were at fault. If the other person that collided with you was at fault, then their insurance will cover the damages to your car and your injuries. This is why there are laws requiring everyone to have insurance to cover the damages they cause.

Save on Your Insurance Policy Rates With These Discounts in Miami Gardens:

Find the best discounts on car insurance using this guide.

Find the best insurance rates with tickets and accidents using this guide.

Check Out Car Insurance Companies in Miami Gardens and Reviews