Who Has the Cheapest Car Insurance Rates in Orlando?

Orlando is world renowned for its incredible resorts and theme parks. Drivers from across the globe flock to this mid-sized city of 285,000 seeking fun on their family vacations. Along with the economic benefits they represent, they contribute to traffic, including auto accidents. With a median age of 34, Orlando is on the younger side, but it’s 160,000 employees are still more mature than some metro areas. Other statistics may also increase a driver’s premiums such as credit scores, average commute times, and auto theft rates.

In fact, Orlando’s auto theft statistics are not as bad as Miami’s, but they are still in the top 200 worst places for car theft. Orlando is ranked #131 for theft in the United States. In 2018, the Orlando – Kissimmee – Sanford Metropolitan Area reported 6,000 stolen cars, yielding a rate of 240 per 100,000 for the area. Drivers should note that not every auto policy covers damages that result from theft.

Auto policies may also be impacted by Orlando’s average drive times. The 160,000 employees in Orlando commute an average of 25 minutes one-way for work. Given a two-earner household, that home logs an average of 8 hours per week driving to and from work. To that, insurance actuaries may also account for trips to the grocery store, recreation, activities, and other short jaunts. Altogether, an average home might log as many as 15 or more hours on the road per week. 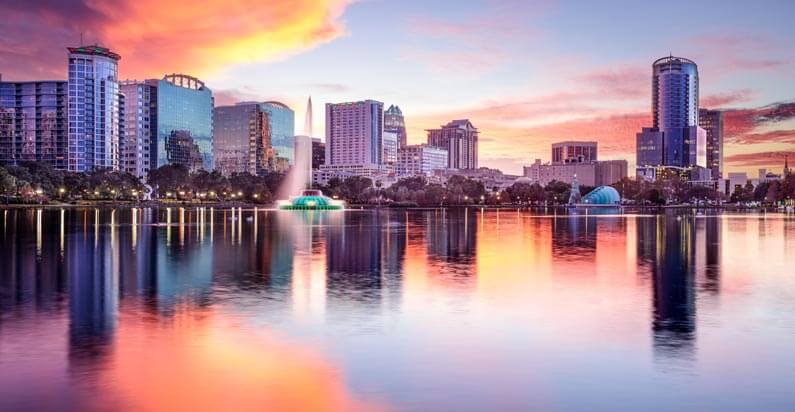 What are the Insurance Requirements in Orlando?

Florida law requires that all drivers carry an insurance policy so that everyone is covered in the event of an accident. The state requires that all policies cover a single person’s bodily injuries up to at least $10,000, with $20,000 available to cover all injuries stemming from the accident. Property damage must also be covered up to at least $10,000, per the law. The figures for uninsured motorists are similar and all of these damages are covered by liability policies.

Liability policies keep drivers legal, but the damage to the drivers vehicle in an accident that they cause are not covered. Drivers with only liability coverage are also inconvenienced when they are the victim of an accident. They often must wait for the at-fault party’s insurance company to settle the claim. However, if they have added collision or comprehensive coverage, a victim can immediately begin making repairs and the insurance companies will settle the matter behind the scenes.

Floridian households all wish to cut their recurring costs for items such as car insurance, utilities, and more. However, cutting costs on insurance isn’t always the best idea. A low-cost policy might mean lower levels of customer service, poor claims coverage, and lackluster insurance bundling options. Drivers should investigate their insurer for their overall reputation as well as bundles, discounts, and general costs associated with the coverage they are seeking.

Use our pro guide to find the best cheap car insurance quotes.

Florida is one of the 47 states in the union that allows insurance companies to charge more to credit challenged customers. Debt-ridden customers can pay as much as $2,400 more than those with excellent credit. In fact, a customer with a poor financial record can pay $1,500 more than a driver with a DWI, but excellent credit. These inflated prices are known to apply to new customers who have poor credit, so their companies might reduce their rates in the future in accordance with good driving habits and regular, on-time premium payments.

Learn how your credit score determines your car insurance premiums.

The main difference between having liability and full coverage insurance is that liability insurance will only pay for injuries to others and their damages that resulted from an accident where you were at fault, where full coverage will not only pay for the damages and injuries done to others but will also cover your injuries and auto damages that resulted from an accident that you caused as well.

There are many car insurance discounts and ways to save on your policy in Orlando:

Are you looking for car insurance discounts? Learn more here.

As you can see, car insurance rates are influenced by a complex set of factors, all of them are determined by risk data for each insurance agency. How much each agency charges, though, based upon similar risk data, can vary widely. In the case of younger drivers, they can save literally thousands of dollars each year by shopping around. The insurance agencies will charge drivers different rates for their automobile insurance premiums by their age and marital status, driving record, area they live in, and whether they carry liability-only or full coverage insurance. If the customer opts for collision insurance, the carriers will charge more for a lower deductible.

Learn how a bad driving record can affect your car insurance rates.

Check Out Car Insurance Companies in Orlando and Reviews